Gasoline prices surged to a two-year high at the pump Thursday after the owner of the largest pipeline in the U.S. reported that shipments are being sharply curtailed, spreading the economic pain from Hurricane Harvey throughout the nation.

Retail prices for gasoline approached $2.49 a gallon by Thursday evening, according to the Oil Price Information Service, up about 14 cents from a week ago. Prices in some cities have climbed much more than that and could keep rising toward an average of $2.60 to $2.75 a gallon in the next 10 days, said Tom Kloza, global head of energy analysis at the price-data tracker.

Since Harvey made landfall on Friday, the storm has knocked out more than 20% of U.S. refining capacity, analysts said.

“In a matter of days the final gasoline supplies are going to get to Atlanta, then South Carolina, then North Carolina, then up the line,” said Patrick DeHaan, senior petroleum analyst at GasBuddy, a price-tracking firm, warning that panic buying would only exacerbate the situation.

The Science of Why Harvey Was So Devastating
Tropical Storm Harvey’s impact on Texas has been catastrophic, but the city of Houston is faring worse than some others. Here’s the science of why Harvey has been especially devastating. Photo: NASA

As remnants of Harvey moved out and recovery efforts started up, floodwaters destabilized a chemical plant outside Houston, causing two explosions at the Arkema SA facility in Crosby early Thursday morning. Containers of warming liquid organic peroxide burst, creating large plumes of smoke that officials described as noxious. Eight more truckloads of the chemical are dangerously unstable, the officials said.

The storm has affected 100,000 homes and sent more than 30,000 people to emergency shelters around the state. At least 42 deaths have been attributed to the storm, a tally that is likely to climb.

Meanwhile, gasoline futures climbed on Thursday after Alpharetta, Ga.-based Colonial Pipeline Co. said that it isn’t getting enough fuel to operate its pipeline between Houston and Lake Charles, La., limiting the amount it can transport onward.

How Harvey Could Help Congress Avoid Shutdown
The humanitarian crisis in Texas and Louisiana due to Hurricane Harvey has the potential to make it easier for Congress to address two contentious issues: raising the debt ceiling and keeping the government running. WSJ’s Aaron Zitner explains. Photo: Getty

Gasoline for September delivery on the New York Mercantile Exchange jumped 14%, to $2.1399 a gallon. The increase on Thursday, which was buoyed in part by the expiration of the September contract, capped eight days of gains that have pushed prices to two-year highs.

Colonial is still getting some fuel from plants in Lake Charles and eastward, but deliveries will be “intermittent and dependent on terminal and refinery supply” until at least Sunday, when it hopes to restart the Houston-to-Lake Charles section, the company said.

“The speed at which our system is running is lower but the system is running and supply is making it to the market, just at a slower pace,” said Buster Brown, Colonial’s director of scheduling and shipper relations.

Swaths of the U.S. are heavily dependent on the 5,500-mile Colonial pipeline for gasoline, and any interruption can cause prices to spike and send retailers scrambling for supplies. Colonial carries more than 100 million gallons of gasoline, diesel and jet fuel a day in pipelines running from Houston to New Jersey. 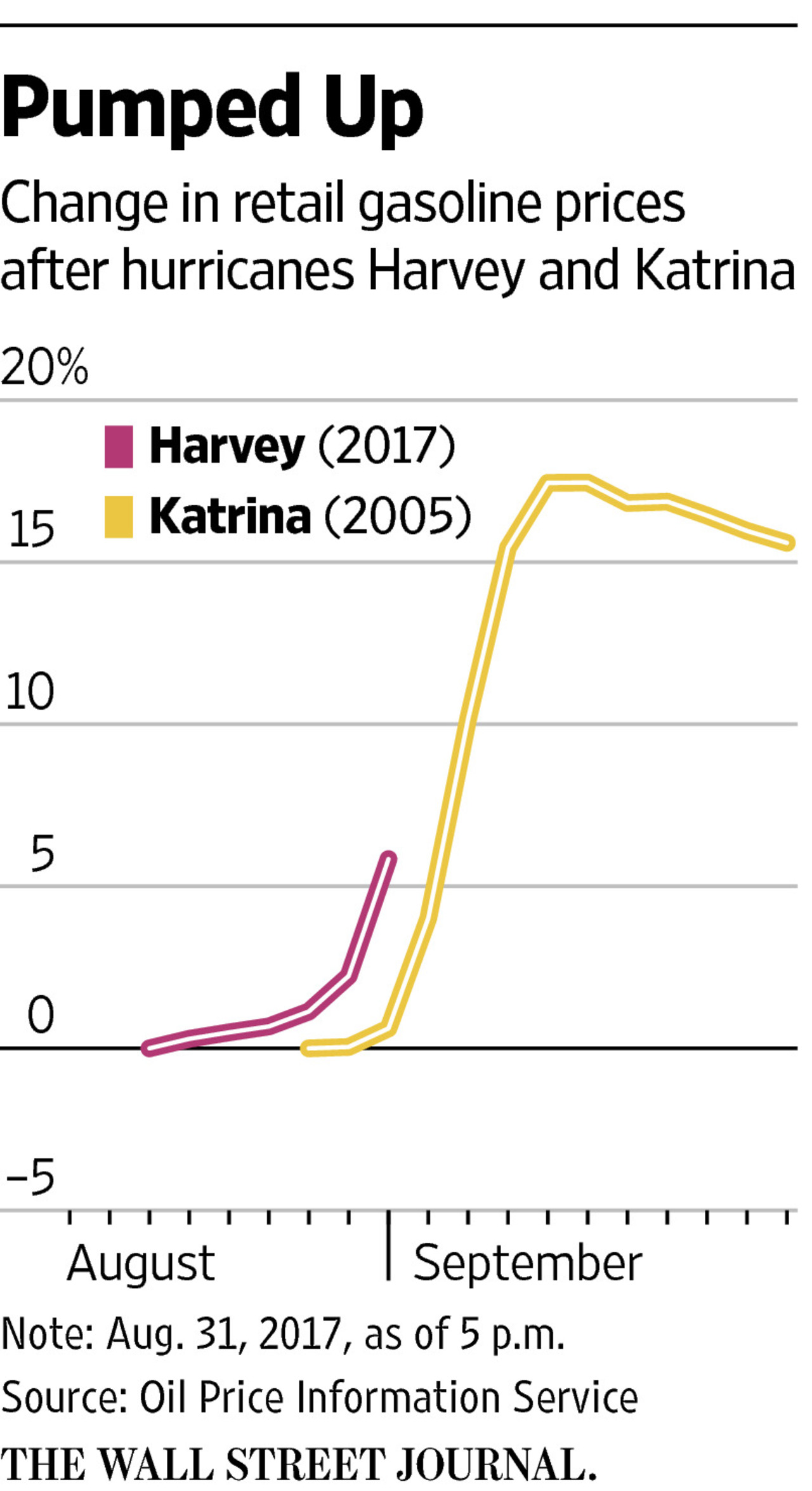 Last year, disruptions that shut the pipeline for several days at a time caused prices to jump, and some gas stations in the Southeast ran out of fuel.

Cities from Texas to Maryland will see “significantly reduced or unavailable supply,” said analysts at Mansfield Oil Co., a fuel wholesaler based in Gainesville, Ga.

Colonial is not the only major fuel pipeline to shut down. The Explorer Pipeline system, which transports fuel from Houston to Tulsa, Okla., and then to Chicago, isn’t running because there’s not enough being produced in Houston to fill the pipes, said Dolin Argo, vice president of operations and business development.

Mr. Argo said the company hopes to restart this weekend but that timing depends on when refineries get up and running.

Texas drivers are starting to worry about getting enough gas.

Amy Pequeno, who lives in Plano, a Dallas suburb, said she drove to three different stations to find them all closed. When she found an open station, the line stretched for blocks.

“People are driving crazy trying to get in; they cut you off,” she said. “I’m empty. I can’t even take the kids to school in the morning if this doesn’t get settled.”

It’s unclear when most refiners will be able to resume operations. By and large, they have not reported the type of major flood damage that kept fuel plants down for months following Hurricane Katrina in 2005. Three plants near Corpus Christi said earlier this week that they were taking steps to start up.

Worries about shortages are prompting unusual movements of fuel. Vessels are being loaded with gasoline in New York Harbor heading for Savannah, Ga., and Jacksonville and Tampa in Florida, said Donald Morton, senior vice president of Herbert J. Sims & Co., who runs an energy trading desk. Typically, fuel isn’t shipped from New York to the South.

The amount of gasoline stockpiled in the U.S. stands at about 230 million barrels, as refiners spent most of the summer running their plants at record rates. But not all of it can be withdrawn.

It’s hard to draw supplies lower than 200 million barrels without seeing tanks in certain parts of the country run out or some pipelines not be full enough to operate, said Adam Sieminski, former head of the U.S. Energy Information Administration and current energy and geopolitics chairman at the Center for Strategic and International Studies.

Major refiners are telling customers that they would only supply their own branded outlets because they don’t have enough gasoline to supply wholesale customers as well, analysts said. That’s leading to an unusual situation in which unbranded gasoline is becoming more expensive than the fuel sold at stations affiliated with major oil companies.

—Lynn Cook contributed to this article.

Write to Alison Sider at alison.sider@wsj.com